B-29 Bockscar: The Aircraft That Ended World War II
Login 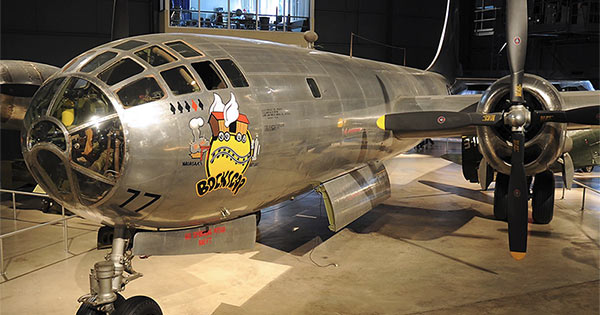 On Aug. 9, 1945, the B-29 Bockscar dropped the ''Fat Man'' atomic bomb on Nagasaki, which led to Japan's unconditional surrender and the end of World War II.

"Bockscar", piloted Major Charles Sweeney, dropped the "Fat Man" atomic bomb on Nagasaki on Aug. 9, 1945, just three days after the atomic attack against Hiroshima, Japan. Bockscar was part of the same squadron as the Enola Gay, the B-29 Superfortress that dropped the first atomic bomb. 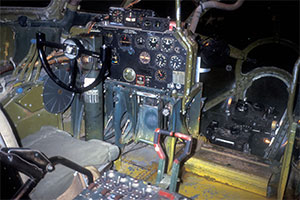 The B-29 had a cruising speed of 220mph and a maximum speed of 357mph. Bockscar was also one of 15 "Silverplate" B-29s with extensive modifications which allowed them to carry nuclear weapons.  While most B-29s carried eight .50-cal. machine guns in remote controlled turrets, two .50-cal. machine guns, one 20mm cannon in a tail turret, and up to 20,000 pounds of bombs, Silverplate B-29s retained only the tail turret and had their armor removed to save weight so the heavy atomic bombs could be carried over longer distances. 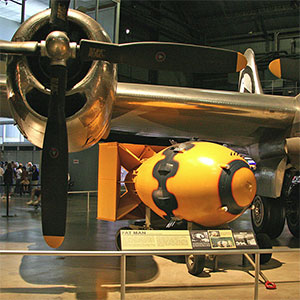 Originally delivered to the United States Army Air Forces on 19 March, 1945 at  a cost of $639,000, the name "Bockscar" was a pun on the name of aircraft commander Captain Frederick C. Bock who was assigned to aircraft.  The Bockscar was flown to the museum on Sept. 26, 1961 and is now on permanent display in the World War II gallery.

2015 marks the 70th anniversary of the end of World War II and The National Museum of the U.S. Air Force - where the "Bockscar" No. 44-27297 and an actual "Fat Man" atomic bomb are on display.  Below is a video from the Defense Media Activity, including an interview with the Air Force Museum Curator Jeff Duford highlighting the mission and impact of the B-29 bombing mission over Nagasaki Japan.  The second video is of Col. (Ret.) Joseph Sweeney (the son of Bockscar pilot Gen. Charles Sweeney) who gave a lecture on the B-29 Bockscar at special event on August 7.

The National Museum of the U.S. Air Force, located at Wright-Patterson Air Force Base near Dayton, Ohio, is the world’s largest military aviation museum. With free admission and parking, the museum features more than 360 aerospace vehicles and missiles and thousands of artifacts amid more than 17 acres of indoor exhibit space. Each year about one million visitors from around the world come to the museum.