Born to Dance. And Donate Life 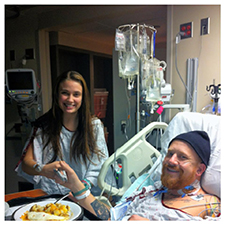 After seeing her featured in various shows at La Comedia, I thought that Diana Sheets was born to dance. However, further inspection revealed that she saved her greatest performance for her role as a sister by giving life to her brother.

Born to Dance. And Donate Life

After seeing her featured in various shows at La Comedia, I thought that Diana Sheets was born to dance. However, further inspection revealed that she saved her greatest performance for her role as a sister by giving life to her brother. A true life heroine, Diana donated a kidney to her brother, David Sheets, restoring him back to good health.

Though officially half-siblings, in Diana's heart, she and David have never been less than whole-siblings.  "I never use the word 'half,' when I talk about him to other people. He's my brother. We grew up in the same house," she said.

It's the love that only a sister can have for her brother that led Diana to make such a sacrifice. As soon as David began experiencing problems with his kidney, Diana was more than willing to help if the opportunity ever arose. "From the moment I found out about David's need for a transplant, in my mind I knew I was supposed to donate to him," she said.

An instructor at the Epic Dance Academy, Diana first learned of her brother's condition when she called her mother after a class. Diana's suspicions arose when her mother asked her to call her back when she got home. Another red flag occured when as soon as she entered her apartment, Diana's boyfriend, Jason, asked if she'd called her Mom yet.

As she heard from her mother that David was in the hospital and that his kidneys were failing, Diana recalls instantly being overcome with grief, "Tears were rolling down my face and I unable to think clearly. I had so many thoughts and questions. He was fine last week when I talked to him. How could the doctors just find this out? Why couldn't this be prevented? It was heartbreaking hearing this news about someone you have known and loved your entire life. As soon as he was able to talk, I called him and said, 'You know I'll be the first in line to give you a kidney'."

The week before Thanksgiving, 2013, the transplant occurred and was a total success. Neither have had any complications, but have gained an even closer relationship with each other. "He and I now share something only few people can share with one another. I absolutely hate what he's had to go through for thirteen months, but I sure as heck love how close we have come because of it," she said.

True stars shine as bright off the stage as they do on it; Diana Sheets shines even brighter. Her feet create magical dance moves, but her heart (and kidney) form even more impressive feats of bravery and honor.