What's Poppin' Inside the Dayton Philharmonic? 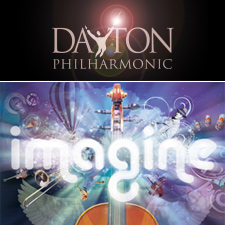 Imagine for a moment what life would be like without music. It's a strange thought, wouldn't you agree? It seems that music is a universal language, and Neal Gittleman, conductor of the Dayton Philharmonic Orchestra would agree. Some of you reading this might think you have this orchestra all hammered out, and that all you get is classical music, right? What if I told you that you were wrong?

What's Poppin' Inside the Dayton Philharmonic?

Imagine for a moment what life would be like without music. It's a strange thought, wouldn't you agree? It seems that music is a universal language, and Neal Gittleman, conductor of the Dayton Philharmonic Orchestra would agree. There is no such thing as life without music when you eat, sleep, and breathe it, and with that being said, how would you live without the Dayton Philharmonic Orchestra?

Just last week, I had the pleasure of speaking with Gittleman who has now been with the orchestra for 18 years. When he first arrived on the scene, the Dayton Philharmonic Orchestra was doing the right things but needed to do them a bit better. Since his arrival the orchestra has experienced good community growth and business growth as well which it needed.

However, the business isn't necessarily what we are here to talk about, but the music and what you get to enjoy. Take a moment to read the full story on who the orchestra is, what they are doing, and why you just might end up enjoying the orchestra more than you ever imagined!

Understanding Who the Dayton Philharmonic Is

Those of you reading this that have been to a performance with the Dayton Philharmonic Orchestra, know full well who they are. However, it's only fair to point out that they are NOT a one trick pony.

Some of you reading this might think you have this orchestra all hammered out, and that all you get is classical music, right? What if I told you that you were wrong? As it turns out, Gittleman and his Dayton Philharmonic Orchestra do have much more to offer you, and that my friends is what we want to share with you in this article.

This orchestra has been around for 78 seasons, and it plans to be around for many more, and during that time they have evolved. What many believed to be just classical music is also the music the audience grew up with, the music you listen to today, and it's special events that bring the whole family together.

This season, couldn't be named more appropriately; the season is Imagine, taking you to whole new levels of what music really is and how it is to be performed. It's not just sitting down and listening to a concert, it's an experience!
The Dayton Philharmonic Orchestra isn't just an orchestra, but they are part of the community and they are revving up to give you the biggest season ever.

Why There are Series and What They Mean

You can think of it as a corporate sponsorship if you will, and when you come to the concerts you will hear the thank you's being announced for each and every one of those hospitals or medical groups. This is what community is, and it's a great way for the orchestra to get the support that they need, so that the community knows who they can turn to when they have a medical need.

Other series like the Charles and Patricia Demirjian Classical Connection Series is simply another series being sponsored that focuses on the evolution of music. This series represents artistic discovery, and the very passion of Gittleman for his orchestra, and this series once again helps to support the community.

Classical, SuperPops, Rockin' Orchestra and Who Else?

Finally, we get to the part where you can stop hearing about classical right? Well sort of, but remember it's still the same orchestra with a different sound. Even if classical isn't for you and you are looking for something different, you've got it with the Dayton Philharmonic's Super Pops. What is it?

As Neal Gittleman described it to me, "it's the music that the audience grew up with." It's the music of two and a half centuries, Broadway, the circus tent; music in that tiny bistro where you met your spouse, and of course jazz and holiday delights as well. Are you surprised? We thought you might be here at Dayton Local, because most people believe that the orchestra is simply classical and nothing more.

Do you wanna rock? Okay, so forget about the circus and Broadway, and let's dive into something a bit grittier. With the Rockin' Orchestra it's time to grab the guitars, and turn it up a notch, playing around with some of the finest musicians as they bring rock music to life. What you will hear are strong vocals, a bit of blues, and enough to get you to say, "rock on!"

This orchestra is multifaceted, and it's doing a fantastic job at bringing back the memories, and that lovin' feeling.

I asked Gittleman during our talk about the in school programs and what they are here to accomplish. I personally have a close friend who was once a music teacher for Kettering Fairmont several years ago. Hearing that the arts programs were struggling and going to be eliminated was astonishing to me as I was a musician for years.

However, when schools started trimming their budgets as a result of the economy, it changed things a bit. Gittleman loved the idea that schools could bring students in to experience the orchestra and be exposed to a greater realm of music. While many private schools and charter schools still take field trips to experience the Dayton Philharmonic Orchestra, things are winding down a bit. Many schools are not sending busses out for any reason, simply because it's an expenditure for them. As a parent, how does that make you feel? Could we find a way to support the efforts to keep our students exposed to great music like the orchestra performs? Perhaps it's something for us all to think about, right?

Now that you know who this orchestra is and what they are doing in and for the community, there is one thing that Gittleman would love to share with you. The biggest merger ever started taking place last year, and it's definitely the perfect marriage to boost the total experience with music and all it involves.

The Dayton Philharmonic Orchestra has formed an alliance with the Dayton Opera as well as the ballet. Gittleman says he would love to see it continue, because great things are happening now, and bigger things are coming in the future.

You may also reach the office for more information when you call 937-224-3521, and you may also email them at info@DaytonPhilharmonic.com.