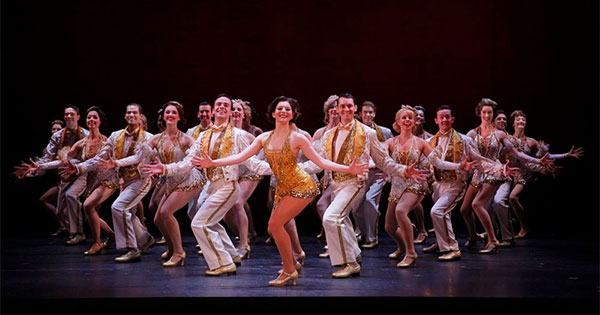 The highly impressive, quick moving, tap dancing feet in 42nd Street do most of the talking throughout the Tony award winning musical.

The feet, along with some classic songs, deliver a message that’s captivating and provides spectacular visuals from beginning to end. To be clear, yes, there is dialogue but the dancing is the true featured attraction of 42nd Street.

From the very beginning, when the curtain is only half raised to reveal a stage full of synchronized legs performing rapid-fire dance movements it’s apparent that the show is going to be dance-centric. Some shows start slowly and build momentum over time, but 42nd Street begins at a frenetic pace, and never slows down. The opening scene is the auditions for the musical within the musical, titled ‘Pretty Lady.’ The plot of 42nd is how the debut of ‘Pretty Lady’ is all dependent on Peggy Sawyer (Clara Cox), a young newcomer, who must fill-in for the leading lady, Dorothy Brock (Kara Gibson Slocum), who breaks her ankle.

With her perfection in dance and vocals, Cox certainly makes Peggy believable as leading lady material. I don’t think even the best Fit Bit could keep up with the number of steps she takes in every dance number. The audience is lead to root for Peggy to succeed, but unfortunately, we don’t learn many personal details about her life other than she’s from Allentown with dreams of being on Broadway. Again, rather than character development, the emphasis is put on dancing and the dancing is so amazing it makes up for any missing pieces.

As a spoiled diva, Slocum also shines in her role as Dorothy Brock, but it’s really the ensemble who deserves high praise for their endless level of excellence. Without even stopping to breathe, they continuously transform themselves into full-fledged tap dancing machines. Their supreme talents are further heightened by some creative staging techniques that are used, such as a mirror that’s hoisted over the dancer’s heads to give the audience a unique perspective. In another scene, shadows are used on a white screen to create some visually stunning moments. It was like watching a shadow dancing act on America’s Got Talent. I kept expecting a standing ovation from Howie Mandel or Heidi Klum. While on the subject of shadows, lighting is a part of productions that often goes without notice and unappreciated, but requires attention in 42nd Street. On more than one occasion, a single light is brought on stage as a rescue from the darkness, and it creates a distinct image.

The brilliance of the dancing, is matched by Matthew J. Taylor in his performance as Julian Marsh, director of ‘Pretty Lady.’ He totally encapsulates the role in every way, from the brash attitude to the dash of conceded arrogance. My wife commented on how even Taylor’s jaw line was in perfect position. Taylor was also responsible for one of the show’s vocal highlights as he sang the “Lullaby of Broadway.” It might be a lullaby, but there’s no chance anyone is going to sleep from it as his strong voice is invigorating. His only other song comes at the conclusion as he performs the title song, which is also masterfully done. The script should have had more opportunities for Julian Marsh to sing.

With the exception of maybe Dorothy Brock, Julian Marsh is also the most fleshed out character, as there aren’t really any subplots. There’s a hint of a love triangle between Dorothy, Abner Dillon (David Scott Curtis) and Pat Denning (Todd Fenstermaker), but it never really develops into anything. The leading man of ‘Pretty Lady’ is Billy Lawlor (Connor Coughlin), who is smitten by Peggy and is always asking her out. Again, his main character trait is his dancing skills. And Gerrianne Genga brings some levity as Maggie Jones with one-liners.

Some of the high points musically include ‘We’re in the Money,’ ‘Shuffle Off to Buffalo,’ and a solo by Dorothy of ‘I Only Have Eyes for You.’

42nd Street continues at the Schuster Center through Sunday, January 15.