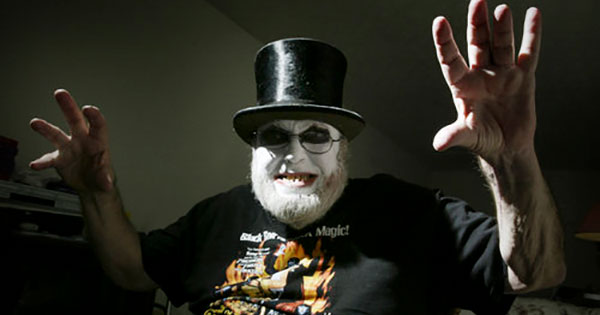 Though he passed away back in 2011, the presence of Barry Lee Hobart, better known as Dr. Creep, is still felt by many, especially around Halloween.

With his long beard, painted face and top hat; Dr. Creep became a Dayton icon as the host of ‘Shock Theatre’ and co-host of ‘Clubhouse 22,’ both of which aired on WKEF-TV Channel 22.

Before becoming an on-air personality, Hobart, a native of Middletown, Ohio, was a master control operator for Channel 22. In January of 1972, in search of a way to raise Saturday night ratings, ‘Shock Theatre’ debuted. The program aired “B” horror films with segments before the commercial breaks featuring Dr. Creep. The films were bigger duds than the ‘Ghostbusters’ remake and the scariest things about them were the acting and special effects. The humorous antics of Dr. Creep is what made ‘Shock Theatre’ watchable. It aired until 1985, for a total of 12 years.

Despite his name, there was nothing creepy about Dr. Creep as he was adored by all ages, children and adults alike. Dr. Creep was so beloved that from 1974 to 1979 he co-hosted ‘Clubhouse 22’ with Joe Smith, Duffy the Dog, and a puppet named Stan the Man. A weekday afternoon kids show, ‘Clubhouse 22,’ included cartoons, comedy sketches, guests and a popular recurring segment where a wheel with the faces of Dr. Creep and Joe on it. Whoever’s face the wheel landed on, that person would get a pie thrown in their face.

Through his career, Dr. Creep gave many more smiles than screams of fear, especially due to his involvement with charities. He would traditionally appear on the local portion of the MDA Labor Day Telethon. He was also a founder of ‘Project Smiles,’ which collects toys at Christmas for needy children throughout Dayton. As a fundraiser for ‘Project Smiles’ an event called ‘Horrorama,’ an all-night film festival held every October was started in 1997, this year it was held at Danbary Dollar Cinemas in Huber Heights.

I remember always seeing Dr. Creep in the Huber Heights Fourth of July parade, one of the numerous public appearances he made. Dr. Creep was known to always be very friendly to his fans, never turning down a picture or autograph request.

Dr. Creep gave so much of himself to others and when his health began to fade, his fans had the opportunity to give back. Dr. Creep suffered from financial difficulty after his medical expenses continued to rise. Several fundraising efforts were held around Dayton to help support him. For as long as he was able, Dr. Creep kept up his persona but in the care of Hospice he passed away in January of 2011, aged 69.

From the memories of his many fans, Dr. Creep continues to live on.