Jersey Boys coming to the Schuster Center
Log In 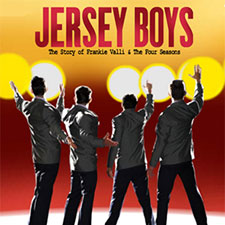 Jersey Boys delivers a spectacular stage show that provides an escape from the stresses of daily life.

After more than fifty years the music by The Four Seasons is still appealing to audiences and equally as compelling is true rags to riches story of their rise to fame in the hit musical Jersey Boys. Filled with tales of deceit, overzealous leadership, dangerous love affairs, costly gambling debts and more, including a whole catalog of classic songs, Jersey Boys has broken attendance records all across the country. The Tony award winning musical will be at the Schuster Center, October 18 – 23.

Led by Frankie Valli, The Four Seasons also consisted of Bob Gaudio, Tommy DeVito, and Nick Massi. With a distinct sound, the quartet wrote their own music and became worldwide stars all before the age of 30. With success came hardships but the glory never faded from their hit songs like, ‘Sherry,’ ‘Big Girls Don’t Cry,’ ‘Oh What A Night,’ ‘Walk Like A Man,’ and ‘Can’t Take My Eyes Off You.’

It’s the music from that era which led to Keith Hines, who plays Nick Massi, to want to be a part of Jersey Boys as he grew up listening to it. Now in his third year in the role of Nick Massi, Hines still enjoys the music just as much as when he first started. “Sometimes as an actor in a musical you like an escape from the songs when you are not on stage, but if a Frankie Valli song comes on the radio I don’t roll my eyes but am singing, snapping, and grooving to the music,” he said.

Massi was a quiet man, who did most of his speaking through song, which is a characteristic that Hines enjoys portraying. “He doesn’t speak a lot, but when he does it means something. It’s fun to bring a man who doesn’t talk much to life and bring meaning to his words,” said Hines.

Out of the four members of The Four Seasons, Nick Massi is the only one who is no longer living. Hines wishes he’d have the opportunity to meet him, but by portraying him each night feels as if he knows him.

For the audience, Hines believes that the Jersey Boys delivers a spectacular stage show that provides an escape from the stresses of daily life. “You not only get to see a rock concert, but a Soprano-esque telling of their story. It’s like a VH1: Behind the Music type story of the rise and demise of The Four Seasons,” said Hines. “The costumes are flashy and the choreography is tight. There’s everything that’s in a Hollywood blockbuster and more.”

While those old enough to remember listening to The Four Seasons enjoy the show, a new generation of fans is also being formed by those hearing it for the first time. “We see three generations in the audience enjoying it. The music is timeless and teens will find it as good as any of today’s pop music. Anyone who is not a fan of the Four Seasons before seeing the show will be after,” said Hines.

Jersey Boys opens on October 18 at the Schuster Center and continues through the 23rd.