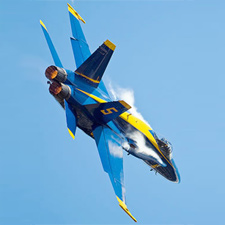 It’s time again for the Dayton Air Show, and if you haven’t been then it’s time to put on your flip flops and head out for this year’s rendition. Not only will Dayton have the pleasure and the honor of watching the Blue Angels fly, but there are some other fantastic daredevils that will be on the scene and someone you won’t want to miss the opportunity to meet!

It’s time again for the Dayton Air Show, and if you haven’t been then it’s time to put on your flip flops and head out for this year’s rendition. Even if you have been before, and even if you attended last year this year’s show is the biggest and best ever! Why? Not only will Dayton have the pleasure and the honor of watching the Blue Angels fly, but there are some other fantastic daredevils that will be on the scene and someone you won’t want to miss the opportunity to meet!

As always, the Dayton Air Show staff strives to bring you the very best each year, and this year it just gets better with the United States Navy Blue Angels. This team is more than 60 years old and counting and while they are showing off, the skills that they are using are real and used every day in the Navy.

The neatest thing about this crew is that some of the crew has a local tie, which is nice. The 2nd right wing pilot graduated from Covington Catholic High School which is drawing some heavy attention from the Cincinnati area. There are a few others that are a part of this crew that have local ties as well, and because the Blue Angels keep records of their shows, it’s great to know that they can track where they get the most attendance from!

These Blue Angels are simply amazing and are flying in for your enjoyment this weekend, July 7th and 8th! This squadron is one of the most sought after in the country, appearing at only 35 sites each year out of the 400 shows total. Yes, Ohio the birthplace of aviation gets them for 2012, and you won’t want to miss out.

Performing in front of more than 400 million viewers and counting, this speaks volumes about how important it is NOT to miss this air show if you have been before. Forget the heat, they are bringing some cool air as they fly, spin, tuck, and roll!

You will also get the chance to view some of the aircraft on the ground, as they will be open for you to look at, and you will get the chance to speak with those who have been in combat before as well as some who have just gotten back from their deployment.

You will experience the real sound of air raid sirens as you see planes come into view ready to release their explosives as if you were right there on that day. With high quality pyrotechnics, fighter planes, bombers, and torpedo bombers, you are sure to get chills up and down your spine. This emotionally charged event is no doubt one of the greatest reenactments ever experienced here in the Dayton area, and it’s one that you don’t want to miss!

The One, the Only, Michael Goulian is Back!

After a decade Michael Goulian, the award winning air show performer is going to be with us this year at the Dayton Air Show! You won’t want to miss this either, as Michael is one of the most highly acclaimed pilots flying his Extra 300SC doing acrobatic maneuvers that are nothing short of amazing. The most amazing thing is that Goulian is a civilian, but has perfected his moves for your enjoyment.

You may remember hearing about the Red Bull Air Racing Team which Goulian is a part of and just to name a few of his awards he has claimed the Art Scholl Memorial (2006) Showmanship Award; Bill Barber Showmanship Award (2009), and most recently the ICAS Sword of Excellence this year. If you haven’t figured it out yet, you don’t want to miss his act, and you will get the chance to meet him after the act!

It Could Rain Women with the Hot

Just in case you think it’s raining women folks, don’t worry because what you see is for real. Yes, this team of women came together more than 25 years ago and has been performing all over the world. These women come from all walks of life including a doctor, an accountant, and many other professions. Performing challenging jumps and decked out with their signature blue and pink parachutes, you won’t want to meet the Misty Blues!

Johnson is a native of Fairborn, Ohio, and will be present along with the multimedia exhibit from NASA, so that you can experience all things NASA as well as a 3 million year old moon rock that was retrieved from the Moon by the crew of Apollo 17 in 1972. If you want to get starry eyed during the daytime this is a great place to be this weekend!

Who is an Honorary Guest This Year? Keep Reading!

Okay, so we told you that there would be a special guest this year that you wouldn’t want to miss out on, and we weren’t kidding. Major "Dutch” Van Kirk will be joining us this year, the last known member of the Enola Gay crew. "Dutch” served as a Navigator on the flight to Hiroshima, and is 91 years old this year. I can assure you that it is an honor to meet "Dutch”, and you will get to view his B-17 "Yankee Lady” too!

This multi-engine bomber along with "Dutch” is a great piece of history, and just think that this could be the last time you get to shake hands or hug a piece of history.

Where You Can Get Your Tickets to the Air Show!

While you can certainly get tickets at the gate the day of the air show, why not plan ahead? You can visit the Dayton Air Show website for the event at www.daytonairshow.com, and you can purchase a great deal with the Family Four Pack, giving you 4 tickets, 4 hot dogs, 4 Pepsi’s, a General Admission parking pass, and a program for the Air Show all for $74.95.

If you are looking for more deals on pricing, you can most certainly buy tickets at Krogers for $3.00 off too! You will find other options for General Admission, LaRosa’s Pavillion Seating, and much more when you look under the section noted for Frequently Asked Questions. The Dayton Air Show is this weekend July 7 & 8, 2012. The gates open at 9 a.m. both days, and the show starts at 11 a.m. and runs until 6 p.m. at the Dayton International Airport.

We are pleased to share with you how committed the Dayton Air Show is to bringing you the best show each year, and that they have the infrastructure to keep it going every year while most airports don’t. We hope that you will join all of us at the Vectren Dayton Air Show this weekend, so bring your sunscreen folks!

How To Get There: Direction to the Dayton Air Show
Park & Ride: Continuous Express Shuttle service provided by Greater Dayton RTA is available from the U.S. Air Force Museum to the show’s main gate for $3 per round trip. Hourly shuttle service also is available from Wright Stop Plaza in downtown Dayton to the show’s main gate. The regular RTA fare structure applies from downtown. Express Shuttle service will run between 8 a.m. and 6 p.m. Go to www.i-riderta.org or call 937-425-8300 for more information.