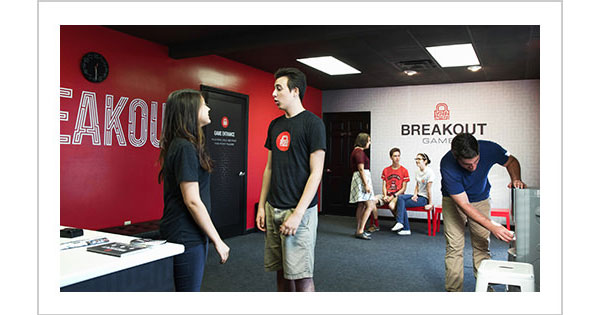 ‘Breakout Dayton’ is a FUN filled THRILL ride that will challenge your mind in whole new ways.

Less than a minute remained, every second was of great importance as we stood between great triumph or utter defeat. We had come so far that not completing the mission would be very disappointing. The clock continued to tick…30, 29, 28, 27..the key to the final puzzle, to unlock the door, was in our hands. We only needed to figure out how to solve it. There was no room for error, the choice made had to be the right one…26..25..24…

The excitement of such high level pressure can only be enjoyed at ‘Breakout Dayton,’ a new entertainment venue in Washington Township, unlike any other place around. It features four different themed rooms to choose from, in which you must work together as a team to solve a series of puzzles in order to breakout. The rooms are 'The Kidnapping', 'The Museum Heist', 'Casino Royale', and the 'Island Escape'. The purpose is the same in each of them, follow the clues and figure out how to escape before the 60 minute time limit expires.

A vital step in succeeding at ‘Breakout Dayton’ occurs long before your scheduled arrival, the choosing of your smartest friends or family to be a part of your group. Don’t be afraid to ask for records of their I.Q. A maximum of 8 people are allowed to participate. I was only able to assemble a group of 6 that made the cut, including an engineer. Though I was fairly confident in our potential as a team, I began to have some serious doubts when we had difficulty finding the location of ‘Breakout Dayton,’ despite the use of a G.P.S. In our defense, it was dark out and mixed within a series of office buildings the facility can be hard to see, but its good preparation for the tests that lie ahead.

After finally arriving, we discovered another couple was added to our group, and luckily one of them was another engineer. (Plus, they had no trouble finding it!) If your group doesn’t fill all 8 spots, there’s a chance that strangers could be joining you. The opportunity to cohesively work with people you’ve never met to solve the puzzles is another one of the unique challenges offered at ‘Breakout Dayton.’

We tried the ‘Casino Royale’ room, and immediately upon entering I felt as if I was in Las Vegas, minus the showgirls. The design team did wonderful in setting the atmosphere as there is a poker table, craps table, roulette wheel, slot machine and more. To not spoil the game and make it easier for any potential future players I won’t reveal any secrets. The best description I can give for ‘Casino Royale’ and I’m sure it’s true for all the other options, everything in the room serves a purpose, you just need to figure out what it is.

When first left alone in the room I felt lost as to where to even begin, but as I began joining the others in looking around some puzzle pieces began to reveal themselves. There is also a Game Master who at all times is watching via a monitor and dispenses some valuable tips along the way. They also stop you from spending too much time chasing dead-ends. You may ask the Game Master for help three times before getting penalized with losing time.

The hour goes faster than watching an episode of ‘The Walking Dead,’ and with twice the adrenaline rush. There is a never a dull moment as your mind is always searching for answers. Rather than just watching the action at a movie or the theatre, you are om the middle of it all yourself at ‘Breakout Dayton.’

A common misconception about ‘Breakout Dayton’ is that the rooms are confining and not spacious enough, but the Casino Royale was plenty big enough. Another rumor to dispel is that it’s frightening to be locked in the room. Personally, I was so focused on completing the task that I thought about being trapped in. Plus, you are free to exit at any time during the hour. I’m sure the Kidnapping Room is more intense, but that is to be expected, based on the name.

‘Breakout Dayton’ is a fun filled thrill ride that will challenge your mind in whole new ways. I highly recommend putting together a group and trying one of the rooms. Go to breakoutdayton.com for more information.

As for my group, the time continued to count down and with 20 seconds left we broke the code to unlock the door and broke out. Mission accomplished, thanks to having some smart friends.