Behind the Scenes: War Horse
Login

Behind the Scenes: War Horse 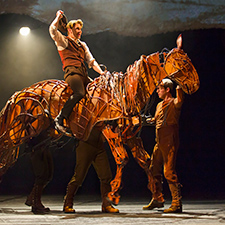 Mike Woody goes behind the scenes with Maria Elena Ramirez, who plays the role of Rose, Albert's mother, in the epic theatrical production of 'War Horse' .

Behind the Scenes: War Horse

The epic theatrical production of 'War Horse' which won five Tony Awards in 2011, including Best Play rides into Schuster Center on Monday, October 22 for performances through Sunday, Oct. 27. Based on Michael Morpurgo, 'War Horse' also inspired the featured film of the same name, is the powerful story of young Albert's beloved horse, Joey, who is enlisted to fight for the English in World War I. Joey is caught in enemy crossfire and ends up serving both sides of the war before landing in no man's land. Albert, not old enough to enlist, embarks on a treacherous mission to find his horse and bring him home.

In role of Rose, Albert's mother, is Maria Elena Ramirez whose thrilled to be part of such spellbinding show. She promises that all elements of the production; such as scenery, music and wardrobe will be as compelling as the storyline. "It's a unique theatrical experience with a wonderful cast and the puppetry is amazing," she said.

A total of 20 life sized puppets are used to portray Joey and other horses. According to Ramirez, the puppetry excels at creating the illusion that the puppets are actual creatures, "You feel like they are real walking and breathing living beings. We ask the audience to believe that they are real, and they do."

Ramirez earned her Master's from the NYU Graduate Acting Program and has been appeared in the Broadway production of 'Bloody, Bloody Andrew Jackson' and in a number of television programs such as 'Person of Interest', 'Law & Order' and 'The Sopranos.' She relishes the opportunity to play different personalities in each role, such as a mother during World War I in 'War Horse.'

With Rose, she admires the characters devotion to being a loving mother to Albert, who always puts the well being of her son above all else. "Despite her hard demeanor, Rose is a very warm person inside," said Ramirez.

In 'War Horse,' Ramirez expects audiences to have their hearts touched. "It's a great story of a boy and his horse. A story of friendship, community and hope," she said.

'War Horse' opens Oct. 22 and continues through Oct. 27 (click for show details). Tickets are on sale now and available at Ticket Center Stage located in the Wintergarden of the Schuster Performing Arts Center or by calling 937-228-3630 or 888-228-3630 or online at www.ticketcenterstage.com.

THIS JUST IN:  Meet Joey next Tuesday, up-close and personal next Tuesday on the corner of Second & Main Streets!!