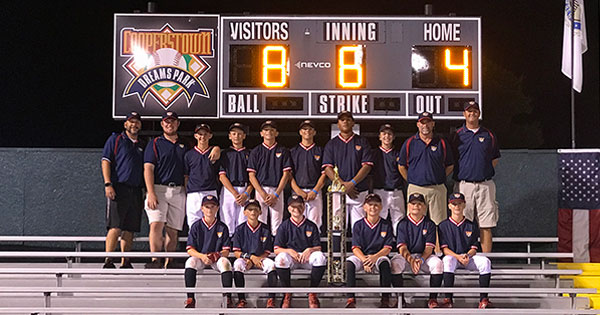 Congratulations to the Cincy Flames, champions of the Cooperstown Dream Park Experience!

On a real field of dreams, in the shadows of baseball’s National Hall of Fame, a team of 12-year-olds accomplished the unthinkable. The Cincy Flames outlasted 104 other teams to be crowned the champions of the Cooperstown Dream Park Experience. With a combination of great pitching, spectacular defense, and an explosive offense the Flames completed the weeklong tournament with an 11-0 record. It all culminated with an 8-4 victory over the Tampa, FL Hurricanes. 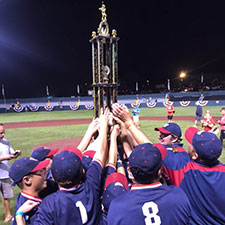 The Flames featured five players from the Dayton area; Bryce Vaughn (Miamisburg), Colten Muhlenkamp (Kettering), Preston Zumwalt (Tipp City), Alec Halter (Springboro), and Connor Smith (Springboro). A total of 12 boys make up the team, with the rest residing around southern and northern Ohio. Most have played together since they were 9 years old and put in a lot of work through practice to achieve such a high level of greatness.

The tournament featured teams from all 50 states, including Hawaii. It’s only the second time that a team from Cincinnati finished first, so the boys are very pleased with their accomplishment. Beyond competing between the lines, all the teams also traded pins with one another. Each team brought a pin with their logo on it and tried to collect as many as they could. Another bonus activity was a visit to the Hall of Fame, which the boys very much enjoyed.

A big audience was treated to seeing the Flames play as the games were live-streamed and played in front of capacity crowds of 3,500 fans.

Cooperstown is where all baseball players dream of going and the Cincy Flames left their mark at a young age. 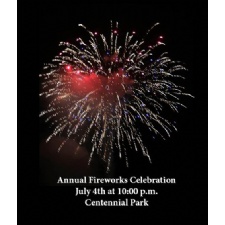