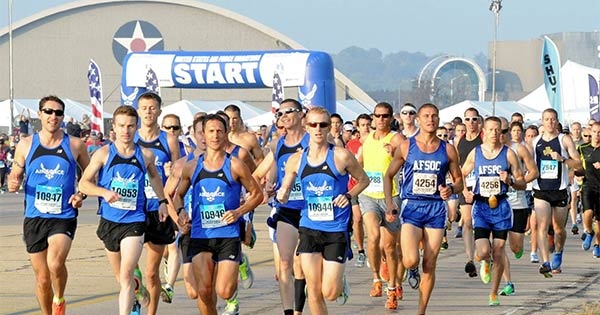 Past Event - Saturday, September 17, 2022
This page may be updated if the event is repeated

The 2022 Air Force Marathon will be on September 17, the third Saturday in September!

The mission of the Air Force Marathon is to "showcase the U.S. Air Force's legacy of pride, professionalism, and perseverance through an enduring world-class fitness experience for all". Simply put, the AFM is "where perseverance and pride take flight!"

Come and be a part of history! The Air Force Marathon is an annual endurance event held the third Saturday of September at Wright-Patterson Air Force Base in Dayton, Ohio. First held in 1997 to commemorate the 50th anniversary of the founding of the Air Force, the Air Force Marathon has grown into a 13,500 participant event, with runners from all fifty states and many foreign countries.

Race weekend features five event distances; a marathon, half marathon, 10K, 5K, and Tailwind Trot 1K Kids’ Run as well as a three-person marathon relay and two Fly! Fight! Win! Challenge Series where runners can earn a fourth medal after completing the 5K, 10K, and half marathon or marathon in one weekend. Other exciting events include our two-day Health & Fitness Expo, Breakfast of Champions, Gourmet Pasta Dinner, Finish Line Festival, and After Party.